Becoming thing. Becoming duration. Becoming event.
To be occupied by a body. Being occupied with a body.
Disappear in the obvious. (Re)appearing in the absence. 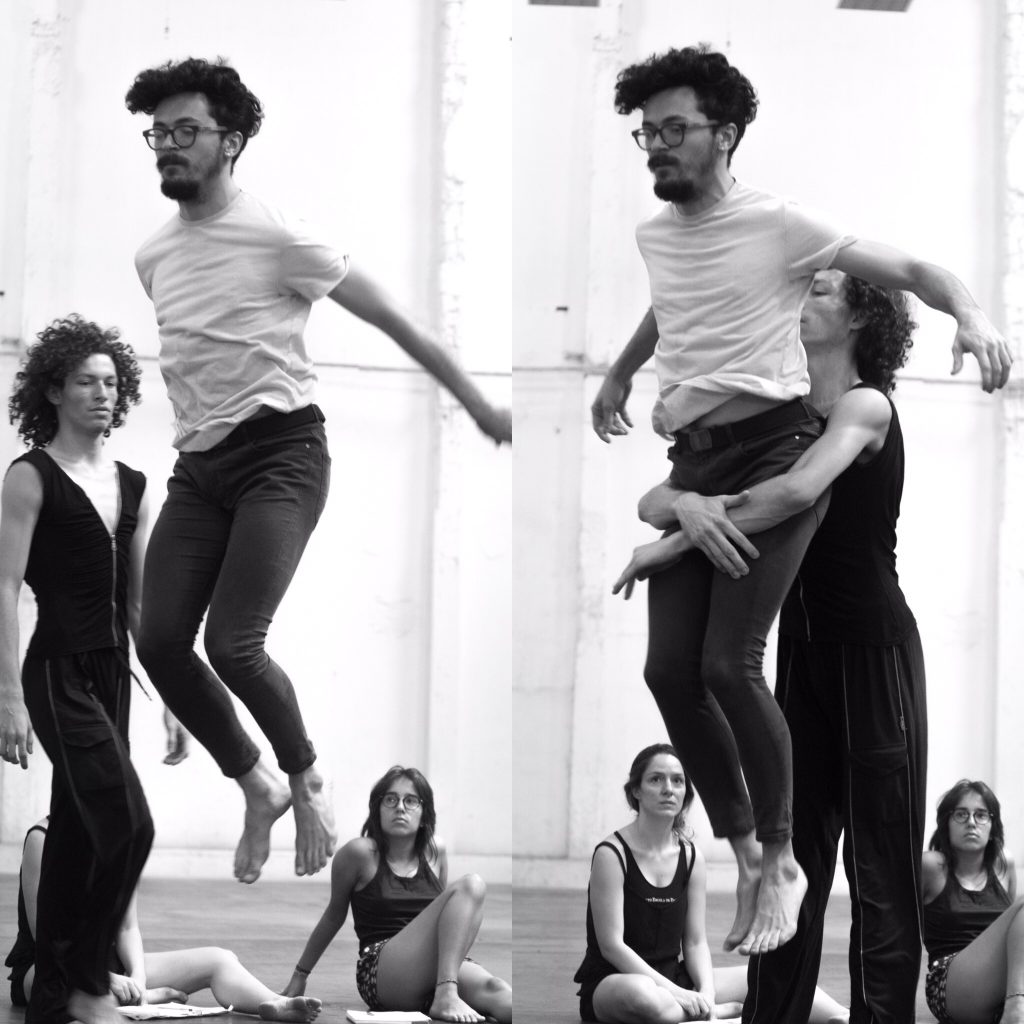 Real Time Composition is a concept-tool that studies and practices a contra-intuitive skill: the ability to look at ourselves looking at (ourselves looking at) things. This is done using the fields of improvisation and composition in contemporary dance as a privileged territory of research.

“Real Time” and “Composition” are two notions that cancel each other. “Composition” suggests that one must refer to the existence of previous knowledge while actively projecting the future. “Real time” implies that whatever is happening, is happening here and now, in the present. The resulting tension (and attention) generated by the collision of those two opposing forces allows an alternative way to perceive and experience time.

In western societies time is represented linearly, chronologically. It takes the form of a straight unidirectional line, which comes from behind (a known past) and moves forward (a foreseeable future). In these models of reasoning, the present is represented by a point, somewhere between before and after. This domesticated time was invented so that humans could synchronize and organize their activities easier. The fact that this sense of time is “manufactured” doesn’t alter the way in which its sense of linearity is perceived as being ‘real’, conditioning and influencing the way we relate to things, with others and with ourselves.

Our belief system produces a perception (which we rarely question) that life unfolds in a sequential flow of events, organized one after the other, ensured by our habits and routines. This sense of linearity is, of course, very useful. Especially when life is predictable and things behave as we anticipate them to behave. Until something substantially alters this sense of order and organization, nothing will make us doubt that things are exactly the way they appear to be. Habits make sure that this illusion endures.

Habits are manifested through ready-made solutions, either in the face of a physical threat (when it manifests itself reflexively), or to preserve personal fictions such as moral integrity or a sense of identity. Therefore, by definition, habits don’t take the present situation into account. It feeds mainly on (irrational) fear that spreads in our bodies when we move away from our comfort zone.

To prevent habit from manifesting itself when facing a new situation it should be sufficient to recognize the obvious: that in the face of the unknown, resorting to codes and conventions already tested is a contradiction. But our body has long since ceased to be prepared to look at the world anew. We have long since lost the ability to develop divergent, available and open thinking. When confronted with new situations, the power structures installed in our bodies and developed via culture and social interaction, make us repeat the same old solutions. In the face of the unknown, even if it does not make sense (or for that very reason), habit takes over.

Real Time Composition doesn’t suggest the eradication of habit from our system. Not only would it be an inglorious task but it would be a waste of precious information as habits are “fingerprints” of what we become as individuals which, when worked as matter, can be extremely powerful. But for this we can not allow habits to take over. Habitual reactions have to be deactivated and be placed side by side with all other available possibilities, never tried before. And for that habits must be intercepted before they manifest themselves, thus preventing them from building (and fight for) a self-centered perception of the world.

Our job then, as real time composers, is to develop a sensitivity towards the manifestations (impressions, expressions) of difference that are constantly emerging inside (and around) life. In order to develop this skill, Real Time Composition proposes a radical reduction of the human influence in the equation of decision-making by making us step down our pedestal and bringing us closer to earth. Both by using non-human laws and principals as a reference to take decisions and by using the body – through performance – as a (battle) ground to explore different ways to move and being moved.

Once this skill – of inhibiting the habit – is incorporated as a default mode on the way we operate and the way we interact with what happens, a field of possibilities emerges. Possibilities that have been always present but we were insensitive, anesthetized and blind to their presence. Through these new lenses, the sense of linearity will give rise to a sense of expansion, the sense of order to a sense of assemblage and the sense of organization to a sense of organism. Accidents will stop being perceived as interruptions but as opportunities. To what? To question our sense of being (human) and substitute it with a sensitivity towards what we can become.

In short, Real Time Composition proposes a simple paradigm shift: instead of reacting based on previous  knowledge one should suspend knowledge. Instead of fighting the unknown (or surrender to it) one should welcome it. As a result the linear experience of time is interrupted, a gap in the sensation of continuity is produced and an interval “emerges”. Inside this interval, time is not linear (or even circular) but “twisted” (like the topological surface of a “Mobius strip”), governed by laws that don’t follow conventional notions of before or after, inside or outside, up or down, left or right. Inside this interval, space has this rare quality of being simultaneously “no longer” and “not yet”.