Music: “I am sitting in a room” from Alvin Lucier 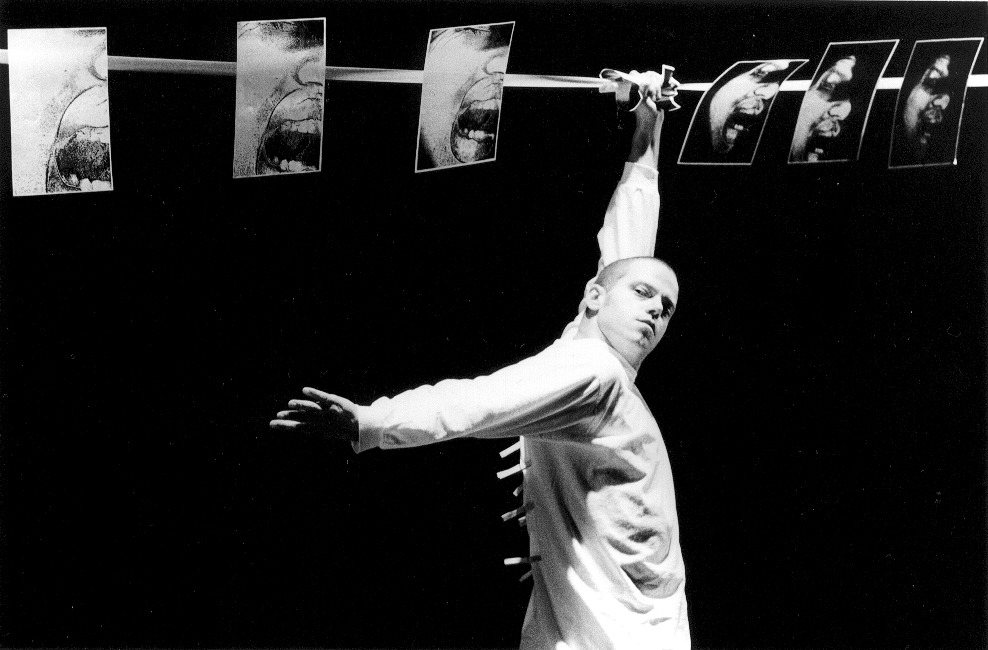 “I am sitting in a room different from the one you are in know. I am recording the sound of my speaking voice and I am going to play it back into the room again and again until the resonant frequencies of the room reinforce themselves so that any semblance of my speech, with perhaps the exception of rhythm, is destroyed. What you will hear, then, are the natural resonant frequencies of the room articulated by speech. I regard this activity not so much as a demonstration of a physical fact, but more as a way to smooth out any irregularities my speech might have.”

Alvin Lucier, “I am sitting in a room”, Lovely Music “(…) Recently, in Festival Danças na Cidade, the audience could witness how Fiadeiro seems to be more and more working on a performed schizophrenia of authorship: on the first part of the program titled Silent Lives, Fiadeiro performs a solo (“I’m sitting in a room different from the one you are in now”), based on Alvin Lucier’s sound experiments on repetition, meaning and entropy, and where Fiadeiro’s body resists the violence of reproductive technologies, by the means of an insistent (re)presentation of his maniacally living presence on stage. (…) It is with Fiadeiro’s exploration of his performing persona in a series of solos that a reconfiguration of his group work takes place and distances those works more and more from the formal boundaries of dance theatre to approach them to performance art. It is as if Fiadeiro’s investment on the self(ish)-destruction of his body-as-author (a destruction we can observe in “I’m sitting in a room different from the one you are in now”), had triggered a provisional destruction of his faith in collective movement. Wait… that’s not quite it yet: for the collective remains central in Fiadeiro’s art. Perhaps, then, we should write instead that it is a need to verbalise the sonic and physiological power of the revolted scream that is leading Fiadeiro to performance art.”

André Lepecki in in Ballet International, 1998

“It’s funny how you don’t have to like something for it to affect you. I thought that I had wasted my evening with João Fiadeiro’s “I’m sitting in a room different from the one you are in now”, yet for days afterwards I’ve been having flashbacks and the whole thing has telescoped together to for a clearer picture in my mind. A picture that hasn’t quite formed itself into words but which makes sense, somehow, to my non-verbal understanding of identity. It stayed with me, and its power has surprised me. I appreciate that.”

“(…) What does the Portuguese New Dance have in common? A taste for surreal, an interest in personal identity – yes, all those themes of eroticism, alienation, the Self, and so on. Also, a lack of concern with being “dancey”: they use whatever theatrical devices they feel appropriate. Cross-genred. Of course it doesn’t always work, but they take the risk. With Fiadeiro’s “I’m sitting in a room different from the one you are in now” that risk paid off.”

Teaser on the 2014 reenactment version: