Existência / Existence was premiered at the Georges Pompidou Center in Paris in 2002 where, for the first time, Real Time Composition was performed live. The protocol of the proposition consisted in placing the performers in front of an audience without any type of score, whilst refusing the idea that it was an “instant composition”. The decisions taken by the performers  on the spot that conditioned the direction of the event, the relations created and the sense of the emerging dramaturgy, were rehearsed by the performers until exhaustion, according to absolutely rigorous criteria and premises that characterize the practice of Composition in Real Time. The play placed the performers and the audience in a place of radical experience in relation to the idea of “present” (and presence) and the experience of not knowing together.

Existência / Existence is a mutant play. A kind of a living organism, independent from its own creators and mentors. And it could not be otherwise, for its biggest ambition is not to be caught. Not being repeatable or reproducible. Always and only to be “present”. And, as it is known to everybody, the present can only be lived once. That is the moment, and not any other, we want to share with the spectator. To turn him into a witness and an accomplice of the presence of a body presented on stage, offering itself on stage. This is the one dramaturgic line of “Existence”. Therefore, “Existence” needs free performers. Free from a future, free from a will, free from the fear of not knowing. In general, they have to admit the evidence that they are not the ones responsible for the sense of whatever they act. All the responsibility is borne by the one who watches (reads) them and therefore their only function (their enormous function) is just to be there. Present, attentive, available. The objective is a simple one: to win the spectator’s trust. And once achieved, maintaining this confidence throughout time. And, as everything comes to an end, when balance is impossible to maintain, the idea is for both – performer and spectator – to lose themselves. If we arrive to this point, the objective of “Existence” has been achieved: to suspend the spectator between real and fictional, occurred and desired, anticipated and unexpected.

The course of things

As a child, you followed the course of water on dry grass. You liked its shine and its way of sliding (almost rolling) on the earth, faded and hardened by the sun. You followed its random path step by step. You watched the water when it stopped here, in time to fill up a small hole, or went round a stone there, sinking somewhere nearby a bush. It happened that you picked up a branch and kept it from filling that deeper hole and stagnating. You then made a little stream to free it. You saw it speed up as the ground inclined. You saw it run against obstacles in its way – perchance a leave, a pile of twigs, fruit fallen on the ground. Playfully, you set traps for it. Drawing it away from its course with the help of a branch, you dug a channel that led right over an ant-hole. And beyond, you built a dam with a handful of carefully set stones. You watched how it had to resolve the accident you’d provoked a few centimetres ahead of the course of time. The game could go on for hours. You felt that at every moment the same challenge against time and matter was being played out. You knew that for every obstacle encountered, the same confrontation between need and coincidence was taken up again before you. The coincidence of its trajectory (random by nature) and the need (simply physical) to drain off. You were thus intrigued by the almost magical power that that shapeless element took to open a way. A way that led nowhere and which did not in itself have any meaning beyond that marriage of need and coincidence.

The challenge of Existência is to produce (or reproduce) that draining off and the accidents encountered over its course. To flagrantly catch (like an assumed offence) a pathway that forks, a gesture that has repercussions on another, an action that is resolved in another… knowing that all that choreography of events  (those forks, repercussions, resolutions) are no more than a combination of chance events organised by reality itself to fabricate something “organic”, “natural” and “real”… To follow with the eyes, as in childhood, that water, the course of things, i.e., what occurs, happens and is but manifested, literally.

To produce or reproduce, that draining off implies prior ignorance of the shape taken by the course of things (whether the course of water will be diverted to the right or left). The possible forks, repercussions and resolutions will emerge only when they are confronted with the chance event in which that action, that gesture and that work will seek their origin. The discovery of that twig, that stone and that fruit fallen on the ground at the moment the course encountered them was so many coincidences that enriched the adventures and destiny (or simply the point of arrival) of our little rivulet of water.

With the eyes fixed on the visible thing, our surprise arose from the unexpected, but without provoking the “extraordinary”. No, the unexpected was still part of the things that are common to us and we accepted them in the fair measure of our surprise. In our childhood we still had that ability to endow things and the course of things with the fortuitous and astonishing sense that belonged to them: that of existing – simply existing. Here and now. Things that were given, offered and opened to other moments as numerous as an hour of time is composed of coincidences. Things as open to the infancy of art as to the inside of a pomegranate that spurts blood the instant a knife breaks its skin. 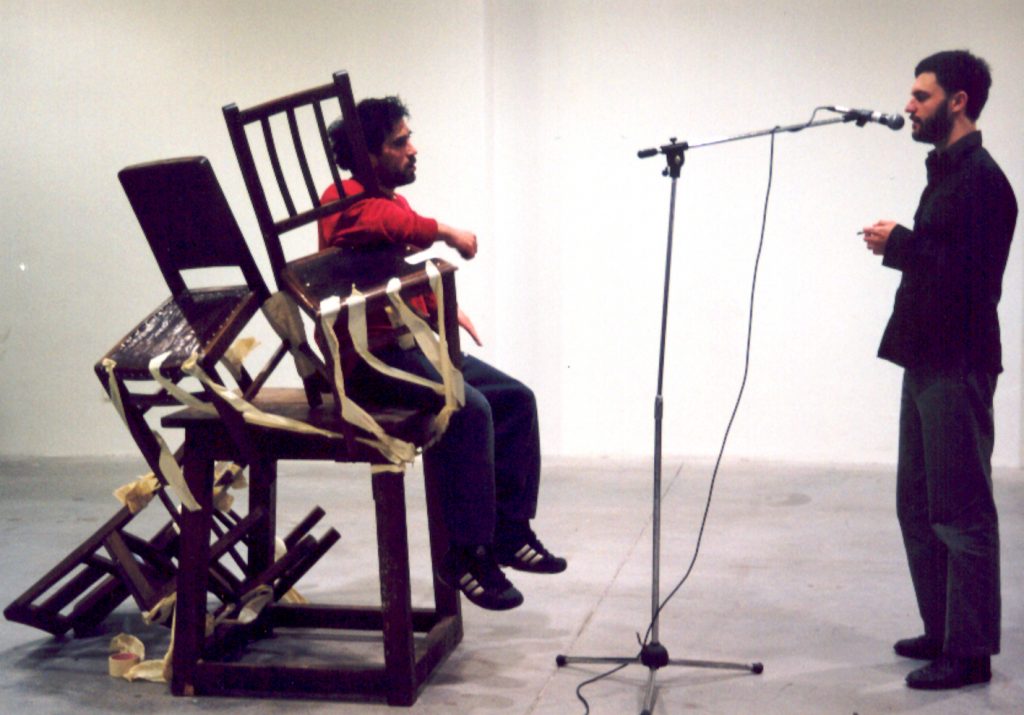 « Now we can explain »: after the show Existência is over João Fiadeiro’s group sits on the front of the stage. Unravelling a spontaneous show with no script and different everyday. It starts with a dialogue between João and Rui Catalão, literary critic from the daily newspaper Público. The dancers sit in chairs at the bottom of the stage and listen while concentrating. Yesterday the main theme was freedom. Today: vagrancy. Each one has the task of making up a character, picturing his own film in an aleatory script. The journalist monologues, a couple tries to fuse, a girl cries on a corner then starts to draw everything she sees trying to graphically convey all she observes. Directing on stage, João develops, moves the dancers from their places, lends them a microphone, makes them diverge. A master of ceremonies and of the game, he rules without commanding and arranges the bodies in order to set them free.

The audience that doesn’t leave the show enters the game. Last week in a public rehearsal in La Villette, Paris, João scotched a nervous spectator to a provoking actress. This evening two characters play with a falling chair, then a girl goes up on stage, takes her blindfold and hits João who answers back slapping her. Everybody takes risks. As the show continues some spectators leave many times unpleasantly – a gently cultural audience that can’t stand to be deranged. Others return everyday like the dancer Sabine Lasserre : « I wish this could last for a year, that there could be a place in Paris where we could exist differently everyday ».