i am (not) here, gallery installation

I AM (not) HERE was initially presented at Galeria CAPC_Sereia in Coimbra, Portugal. The work I Am Here (2003), which served as a basis for this installation, was initially produced for the stage with a frontal audience. For this project the work was (de)composed in three interdependent moments, each exhibited in a different room of the gallery. 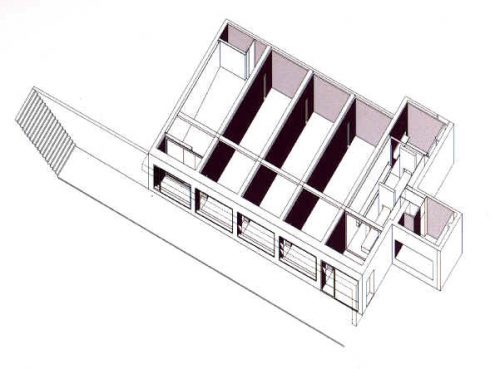 The rooms had small openings in the back that allowed the circulation between them, enabling that each “scene” could be performed/shown simultaneously, in an independently and interconnected way. This allowed the performance to be filmed (without an audience) in only one take. The rooms had one camera each which were recording the whole time while João Fiadeiro was moving from one room to the other activating the three phases of the work.

Video stills from the videos projection

The visitors of the exhibition had only access to the video of the performances (projected in wooden video walls in the center of each room). The video projections were placed in the same position as the câmeras that filmed the performance so that the visitor would have a sense of perspective and continuation of the room.

Behind the wall (in the back stage) the visitors had access to the traces, tracks and leftovers of the performance itself.